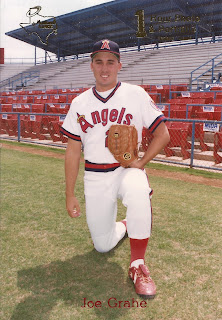 Joe Grahe came into this September 1991 with a 1-7 record and still looking for his first win as a starter, according to UPI.

Grahe responded by throwing a complete-game that ended in a walk-off Angels win and a win for Grahe, UPI wrote.

"I've been able to get a big monkey off my back," Grahe told UPI afterward. "It's not a question of doubting my ability. It was just a question of when am I going to get a break and win a game."

Grahe's focus later turned from notching wins for himself to wins for the team, and recording saves in the process. He turned closer for the Angels the next year and tallied 21 saves. He then tallied double-digit saves his next two seasons.

Grahe's career began in 1989, taken by the Angels in the second round of the draft out of the University of Miami.

At Miami, Grahe earned the description "one of the finest pitchers" in school history over his three seasons. He completed 11 games in 1988 and 10 in 1989, school records. He also recorded 433 strikeouts and 34 wins. He later won induction into the school's Hall of Fame.

Grahe also recorded Miami's only win in the 1989 College World Series. He threw a five-hitter and struck out eight.

"We hit the home runs and played pretty good defense," Miami Coach Ron Fraser told reporters after the win. "But I thought the night belonged to Joe Grahe."

With the Angels, Grahe started in 1990 and quickly climbed the ladder. He played at AA Midland, AAA Edmonton and then, in August, debuted with California.

Grahe then turned closer mid-season 1992. He saved those 21 games for the Angels, but let an August one get away with some wildness.

"I was trying to run a 'cutter' in on him," Grahe told The Los Angeles Times after the loss. "It's been a good pitch for me, but I got a little overaggressive and it hit him. It can happen that way."

"It was a long road back," Grahe told The Associated Press after the win. "I went through some tough times, but I still had faith in myself."

Grahe played his last games in the minors in 2000. He has since returned home to Florida, where he works in real estate.