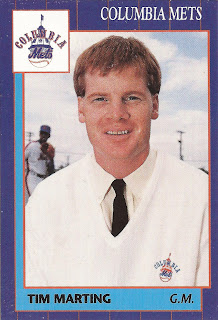 Tim Marting assessed the state of baseball in Oklahoma's capital in 1988 to Oklahoma Today.

"The strength of baseball in Oklahoma City is at the highest point it's ever been now," Marting told the magazine.

Marting spoke to Oklahoma Today as the spokesman for the Oklahoma City 89ers. He went on from there to help with the strength of other teams as as a general manager and in other roles.

Marting's career in baseball began at Gonzaga University. His roommate there also went on to a career in the minors, Monty Hoppel, the longtime general manager at AA Midland.

He started with Oklahoma City in 1986 as an administrative assistant. He then became publicity director in 1987. He moved on to Tucson for 1989 as assistant general manager.

Marting then became full general manager at single-A Columbia in 1990 and served as vice president of the Rockford Lightning basketball team in 1991.

He later became general manager at high-A Modesto. In August 1994, he talked up Modesto baseball as the major league clubs remained on strike.

"Initially, the major league fan viewed this as just the Oakland A's and San Francisco Giants being on a road trip," Marting said, according to The Santa Cruz Sentinel. "Now they're beginning to realize the Giants and A's might not be back for a long time."

Marting later joined Sports Services America in Colorado Springs, a sports management company. In 2003, he told The Greeley Tribune about the factors that allowed minor league teams to succeed.