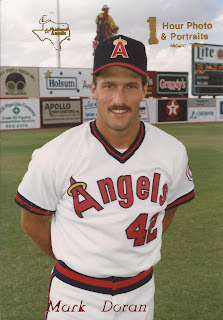 "He's not the type of kid you can rush," Bavasi told The Times of the fourth-year player. "Tools-wise, you can compare him to Kirk Gibson, maybe a notch below. He's a speed-strength guy--he's very strong, he's got the arm and he can run. With him, he's either going to blast off or it won't happen at all."

Doran played that year at single-A Palm Springs. He made AA Midland the next year and AAA Edmonton in 1988. For Doran, though, the majors never happened. He played eight professional seasons, but never made the bigs.

Doran's career began in 1983, taken by the Angels in the first round of the draft out of the University of Wisconsin.

At Wisconsin, Doran played baseball, but also football. He served as a kicker for the Badgers from 1980 to 1982.

He started with the Angels at single-A Peoria. He played his first two seasons there. He hit .289 his second year there.

Doran has since returned home to Illinois, where he serves in 2018 as the owner of Diamond Sports Academy in Mokena. In 1996, he served as a group leader at a White Sox training camp.