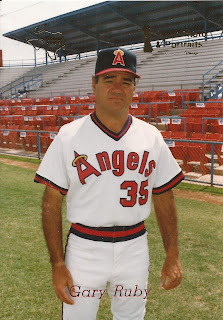 If the Tri-City Valley Cats won this game in September 2010, they won the league title. Reliever Michael Ness just had to hold on in the ninth with a four-run lead, according to The Troy Record.

After two singles, though, Ness was one batter away from maybe facing the potential game-tying run. Then out stepped Valley Cats pitching coach Gary Ruby, The Record wrote.

"Ruby came out and calmed me down and said, 'get a groundball,'" Ness told The Record after the big win.

Ruby calmed pitchers - and made them better - over a quarter century in the pros. He did so after his own brief playing career, one where he saw three seasons in the minors.

Ruby's career in baseball began in 1969, taken by the Indians in the 22nd round of the draft out of Arizona State University.

Ruby played three seasons in all. He started in the rookie Gulf Coast League and at AA Waterbury. He ended in 1971 at single-A Reno.

Ruby then left the game for a stretch. He earned his masters in education administration from the University of Scranton and even served as an assistant professor at the school from 1982 to 1985, according to his Grand Slam card.

He then started his coaching career. He began at single-A Quad City in 1987 as a pitching coach. He moved to single-A Palm Springs and AA Midland in 1989.

At Midland, Ruby had the difficult job of developing pitchers in a hitters park, according to The Los Angeles Times. Ruby tried to turn that into somewhat of a positive.

"If you can pitch here, you can pitch just about anywhere," he told The Times in August 1989. "Everything that could possibly work against you is here. The wind is blowing out here 99% of the time."

Ruby then made AAA Edmonton as pitching coach in 1991. He stayed at AAA with the Angels through 1995. He moved to the Indians and AAA Buffalo for 1996.

He became a minor league coordinator for the Angels, Phillies and Pirates, then returned to the minor league coaching ranks. He spent four seasons as pitching coach at short-season Tri-City in the Astros organization, then two at AA Corpus Christi.

Ruby has since retired from coaching, but has since gone into some youth instruction. In 2014, he told The Citizen's Voice about his basic approach prior to a youth clinic.

"I'd really like to see, in my own personal opinion, a lot of Little League coaches come in," he told The Voice. "I give them credit, because they're all volunteers and a lot of them give up their own time to do that. But pitching has to be done right. Listen when I tell you this: It's not rocket science. But you've got to know the fundamentals."