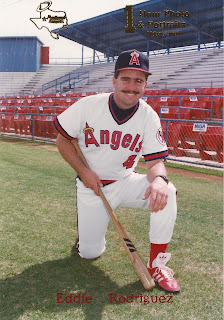 After more than a quarter century as a coach and manager Eddie Rodriguez returned to the place where he got his minor league managerial start in 2014, according to The Quad City Times.

Then a coordinator with the Padres, Rodriguez visited and reminisced about his long career, The Times wrote.

"Baseball has given me a living and given me a lifetime of memories, helping kids work toward their dreams,’" Rodriguez told The Times. "I feel very fortunate."

Rodriguez' long coaching career has taken him through both the minors and the majors. He's served as a coach for multiple major league squads and worked with players like the Royals' Mike Moustakas.

He also played himself. He saw five seasons as an infielder and made it to AA.

Rodriguez' career began 1978, taken by the Orioles in the first round of the January draft out of Miami-Dade College.

Rodriguez started at rookie Bluefield. He then made single-A Miami in 1979 and AA Holyoke in 1981. He played one final season at AA Waterbury in 1984, ending his playing career.

Rodriguez then moved on to coaching. He served as hitting coach at Quad City in 1985, then became manager there in 1987.

In July 1989, Rodriguez spoke to The Los Angeles Times about managing young men - and keeping them in line. He did so through forceful advice, or a $5 fine.

"You should see, they get awful cranky when you tell them they're out five bucks," Rodriguez told The LA Times.

Rodriguez moved to manage AA Midland in 1990. In 1995, he served as a scout for the Dodgers. In 1996, he got his first major league coaching job, credited as third base coach for the Angels.

He served with the Blue Jays as a base coach in 1998, then returned to the minors. He managed short-season St. Catharines in 1999 and Queens in 2000.

He returned to the bigs in 2001 with the Diamondbacks as first base coach - just in time for Arizona's 2001 title. He also coached on the 2000 U.S. Olympic gold medal team. To Newsday in May 2001, Rodriguez marveled at his good fortune.

"For all I have been through, it's just astonishing," Rodriguez told Newsday. "I just hope it lasts forever. I still pinch myself on the way to the ballpark."

Rodriguez moved to the Expos in 2004 as bench coach and followed the team to Washington. He coached for the Mariners in 2008 and arrived with the Royals as third base coach in 2010. He stayed there four seasons and served as an assistant coach with the Padres in 2016.

Rodriguez worked with Moustakas on his fielding footwork in 2012. Early successes brought praise from Rodriguez, according to ESPN. Then Rodriguez stopped needing to give praise.

"I finally told him, 'I'm tired of coming over and giving you knuckles or high-fives and telling you that you made a great play,'" Rodriguez told ESPN later, "'It's what I expect of you now.'"