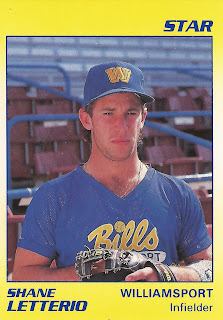 For Shane Letterio, frustrations mounted in 1992. But he was still optimistic.

Having played briefly the year before at AAA Calgary, Letterio finished out that year all the way back at high-A Peninsula. In 1992, his sixth season as a pro, he was at AA Jacksonville and not playing every day.

"I still feel confident that I can make it to the big leagues," Letterio told The Orlando Sentinel that June as he tried to come back from an injury. "I just have to get back to playing on a regular basis and show what I can do."

The optimism aside, in his six professional seasons, Letterio never did make it to the big leagues.

Letterio's career began with promise in 1987. Selected by the Reds in the fifth round of the draft, out of Lake Mary High School in Florida, Letterio had to choose between the Reds and the University of Miami.

Letterio started with the Reds at rookie Billings, hitting .284 in 64 games. He moved to single-A Greensboro for 1988, his average dipping to .223.

In 1989, Letterio finally arrived at Miami, playing for the unaffiliated Miami Miracle, though still with the Reds. He hit .255, with four home runs. One of those home runs came in May, a three-run shot in a 4-3 loss.

For 1990, Letterio arrived in the Mariners system, taken in the minor league draft. With the Mariners, Letterio saw AA for the first time, at Williamsport. He hit .251, with two home runs. In one July contest, Letterio had three hits.

Letterio made the jump to AAA Calgary to start 1991. He got into 17 games, hitting just .174. Then he got sent back down, all the way to Peninsula at single-A. Letterio was told he would likely return to AA later in the year, and learn other spots in the field.

"I was upset at first," Letterio told The Newport News Daily Press in May. "Up there, I was playing like three times a week. This way I'll have more of an opportunity to play. Here, I'll be learning all kinds of positions."

But Letterio never made AA that year, he remained at Peninsula the rest of the season. He then saw Jacksonville in 1992, what would be the final year of his playing career.

Letterio has since gone on to continue in baseball, as an instructor, heading up Letterio Baseball Academy in Longwood, Fl.