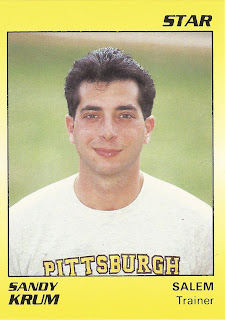 After more than 15 years as an athletic trainer in the minors and in the majors, Sandy Krum soon moved on to a new job in 2007 - in reality TV, according to the Chicago Tribune.

The former assistant trainer for the Cubs signed on as a trainer on the show "The Biggest Loser."

"It is similar to what I did for the Cubs," Krum told the Tribune that August. "It is a great opportunity and there is a lot of work in this industry for trainers. There is life after the Cubs."

Krum's life that led to the Cubs started in the Reds and Pirates systems. His time since has been spent on other television shows and as a motivational speaker.

Krum received his degree from Ohio University in sports medicine and exercise psychology.

He started with the Reds that year at rookie Sarasota. He moved to single-A Cedar Rapids in 1988 and even saved a boy's life away from the park, according to his personal bio.

Krum moved to AA Chattanooga in 1989, then arrived with the Pirates at high-A Salem for 1990. He then made AA Carolina and AAA Calgary and Nashville.

At Nashville in 1998, Krum talked to the Nashville Tennessean about icing injuries, when to do so and when not.

"Nothing is etched in stone that a player must ice," Krum told the Tennessean. "You must differentiate between maintenance and injury prevention. You have to get a sense of how your body responds before you make a long-term decision about what's best for you."

He arrived in Chicago as assistant trainer in 2001 and stayed through 2004. His tenure there ended acrimoniously as he believed the Cubs improperly fired him for whistle-blowing, according to the Tribune. He filed a lawsuit, but it was later dismissed.