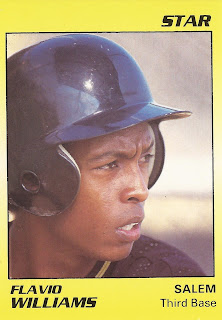 The Augusta Pirates missed out on the win in this August 1989 game, but third baseman Flavio Williams still had himself a big day, according to the Pittsburgh Post-Gazette.

Williams went 4 for 4 in the 13-10 loss and scored three of his team's runs, the Post-Gazette wrote.

Williams had that big day in his third season as a pro. He played in just one more. He never made AA.

Williams' career began in 1986, signed as a free agent by the Pirates out of his native Dominican Republic.

Williams started with the Pirates in 1987 in the rookie Gulf Coast League. He it .278 in 42 games. The Pittsburgh Press listed Williams as among the teams' consistent hitters.

Williams moved to short-season Watertown for 1988. He hit .274 there over 59 appearances. He played 1989 between short-season Welland and single-A Augusta, amassing a .323 average between them. He went 2 for 3, with two RBI in another August game.