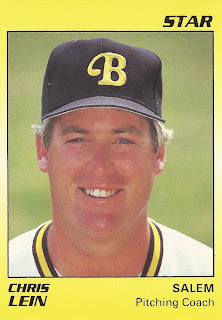 Florida International University hurler Chris Lein more than went the distance in this May 1979 regional game - he threw a 3-0 no-hitter, according to the Orlando Sentinel.

He gave his insight on how he did it to the Sentinel afterward.

"I just kept the ball low, changed speeds and made 'em hit it on the ground," Lein told the Sentinel.

Lein took his insight on pitching to a brief career as a player in the pros and then passed that insight along in a longer career as a minor league coach and later became a scout.

Lein's career began that year in 1979, taken by the Yankees in the 16th round of the draft out of Florida International.

He made AA Nashville in 1982. He allowed two runs on six hits in a May game, his first start of the year, according to The Tennessean.

"I thought I threw okay," Lein told The Tennessean. "I threw 75 pitches and only eight curves. I had a good sinker, but lost it in the second inning with bad mechanics and gave up those runs."

Lein played one more season at single-A Alexandria, but an arm injury ended his career.

"He teaches a simple, but effective philosophy," his Star card reads, "throw strikes and challenge hitters."