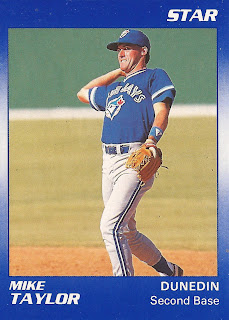 Rice University assistant coach Mike Taylor had high expectations for his team in 2010, as did the other coaches, Rice slugger Anthony Rondon told RiceOwls.com.

The hadn't made it to Omana the previous season and that meant it had been a horrible season, Rondon recalled Taylor said, according to the site.

"That's what he said," Rendon recalled to the site. "Really? We were in the top 10 in the nation. But it's true, though. We have to make it to Omaha every year for it to be a successful season."

Taylor has watched over players like future major leaguer Rondon at the college level for much of the past quarter century. Prior to that, he played himself. He saw five professional seasons, but never made AAA.

Taylor's career in baseball began in 1988, taken by the Blue Jays in the 53rd round of the previous year's draft out of San Jacinto College in Texas.

In Texas, Taylor played his high school ball at Waltrip High and won local amateur athlete of the year honors in 1986 and all-state that year and the previous year. He then helped San Jacinto to the junior college national championship.

Taylor started at short-season St. Catharines. He played two games then moved to single-A Myrtle Beach for a full 1989 campaign. He hit .221 over 121 games while knocking in 36.