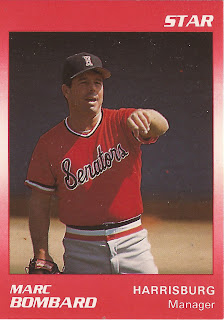 "He definitely has the arm to pitch major league ball," Bombard told The Press that July. "He has three quality pitches - a fastball, a curve and a changeup - and he seems to like the role he's in."

Cole went on to take his role to the majors for a single season. Bombard was once a minor league pitcher himself, with enough quality pitches to throw a perfect game.

Bombard, though, never made the majors as a player. His role ended up being different. The role Bombard settled into was one as a minor league manager, ushering players like Cole on to the bigs.

Bombard's career in baseball began in 1971, signed by the Reds out of the University of Texas-El Paso.

For Tampa in 1975, Bombard threw a perfect game.

"I don't think there's any doubt about it," Bombard told The Lakeland Ledger after that perfect game. "This is my greatest thrill in sports. I'd have to go a long way to top the way I feel now."

He got his first managers job at rookie Billings in 1982. He returned to Tampa in 1984, then managed at single-A Cedar Rapids in 1988.

For 1993, he was also interviewed for the top Reds managerial job, the one in Cincinnati.

Bombard didn't make it that year, but he did make it in 1996, serving as Cincinnati's third base coach. In 2005 and 2006, he also served as Phillies first base coach in Philadelphia.