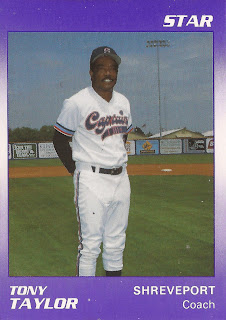 Tony Taylor grew up in Cuba, but his adopted hometown became Philadelphia.

Taylor played 15 of his 19 major league seasons in the city and eventually came to be compared to the Liberty Bell and scrapple as Philadelphia institutions, UPI wrote.

"People shouting help me hit," Taylor told UPI in May 1975 of the fan support, "because I know they are behind me."

Fans shouted for Taylor over nearly 2,200 major league games in his long career. He hit .261 and stole more than 230 stolen bases.

He's then gone on to a long career as a coach, serving as a hitting coach in the majors and coach and manager in the minors.

Having come to the United States before the Cuban Revolution, he even later got to reunite with his family in 1970 after 11 years apart.

Taylor's career in baseball began in 1954, signed by the Giants as a free agent out of the future communist country.

He started at Class C Texas City, made Class B Danville in 1956, then AA Dallas in 1957. He then debuted in the majors in 1958 after moving to the Cubs system.

Taylor played two seasons in Chicago, hitting .280 in his second season there. He then first played as a Philadelphia Phillie in 1960. He hit .287 for the Phillies that year and he made the All-Star team.

Then, in June 1971, the Phillies traded him to the Tigers. Taylor didn't want to leave, according to The Associated Press. "This is my home; I'll die here," Taylor told The AP after the trade.

Months before the trade, he saw his mother for the first time in 11 years, along with other relatives as Cuba allowed them to leave the island. He'd tried to get them out for years, according to The AP.

"It is the biggest moment in my life," Taylor told The AP of the reunification.

Taylor played the rest of that year and the next two with Detroit. He then returned to finish out his career in three more seasons back in his home, Philadephia.

Coming out of spring training 1976, Taylor spoke to The St. Petersburg Evening Independent about his popularity in Philadelphia.

"They have a Tony Taylor Day in 1963 in Connie Mack Stadium, another in 1970 at Connie, and another Tony Taylor Day last year in Veterans Stadium," Taylor told The Evening Independent. "I must be doing something right. Right? There is this big love affair between the fans and Tony Taylor - a great honor, indeed, for me."

Taylor then turned to coaching. He served as a hitting coach for the Phillies from 1977 to 1979. By 1983, he was a manager in the minors at single-A Peninsula and then at AA Reading and short-season Utica.

"I've been fortunate to have some really good coaches who gave me good advice," Berg told The News. "(Taylor's) unbelievable. He's by far the best infield coach I've ever had. He makes playing (infield) easier on you."