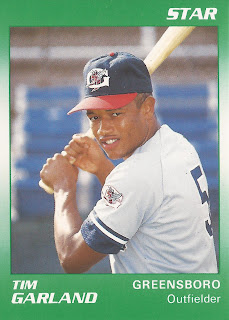 Tim Garland chose to play with independent Amarillo in 2001 because of the team's manager Lonnie Maclin. He was a friend, according to The Amarillo Globe-News .

With him, Maclin knew, Garland brought more than a decade of professional playing experience.

"That's a lot of pressure off me because Lonnie is a friend and knows what I can do,'' Garland told The Globe-News. "I'm able to relax. My job as a leadoff hitter is to get on base and help my team win.''

Garland's affiliated experience included time in four different organizations. He made AA, but he didn't make it higher. By the time his professional career was done, though, he had time in 15 different seasons.

He's also since gone on to a career as a coach.

Garland's professional career began in 1989, taken by the Yankees in the 48th round of the draft out of Pensacola Junior College in Florida.

Garland started with the Yankees in the rookie Gulf Coast League. He moved to single-A Greensboro in 1990. He hit .213 in 77 games there. He went 1 for 5 in an April game.

Garland returned to Prince William in 1992, but it was his last season in the Yankees system. He returned in 1994 in independent ball, playing at San Antonio. He moved to independent Rio Grande Valley in 1995.

He then returned to affiliated ball for 1996, with the Giants at high-A San Jose. He played there for two seasons. He made AA Shreveport to start 1998. He finished that year with the Orioles at AA Bowie and high-A Frederick.

His final season in affiliated ball came in 1999 at AA Midland with the Athletics.

Garland has since gone on to a career in coaching, first in the Athletics system and, continuing in 2015, the Astros system. He's assigned to single-A Quad City for 2015.

In 2013, Garland was at AA Corpus Christi watching over such Astros prospects as George Springer.

"The guy can do some amazing things. He's a joy to watch, day-in and day-out. He's a hard worker, he plays the game hard," Garland told The Houston Chronicle that June. "The sky's the limit with this young man. He does something every day that kind of like woos me."