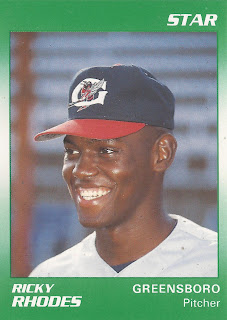 When Ricky Rhodes was with the Fort Lauderdale Yankees in 1992, a decision by his coaches led to the pitcher being demoted from the starting rotation to the bullpen.

He didn't take to the move well. The player who had never been above high-A, threatened to quit if he wasn't traded.

"My future is not in baseball right now," Rhodes told The South Florida Sun-Sentinel. "Going somewhere else is the only way to get me back to playing. I'm finally realizing I have to do what's best for Ricky Rhodes."

Rhodes would ultimately choose to stay, without being traded. But Rhodes was correct about one thing, his future wasn't in baseball. It was actually in basketball - women's basketball.

Rhodes today is making the same kinds of coaching decisions, something he's been doing for the past 10 years, as head coach of his McLennan Community College in his hometown of Waco, Tx.

Rhodes was drafted by the Yankees in the 35th round of the 1987 draft. He showed some promise with the rookie GCL Yankees, posting a 6-3 record with a 2.33 ERA. But in five seasons, he only advanced to advanced A Fort Lauderdale.

His baseball days over, Rhodes went back to school, attending McLennan, then San Antonio's University of the Incarnate Word and switching to basketball and playing at both schools. He returned to McLennan in 1995, becoming an assistant on the men's basketball team. It was in 1999 that he took over the woman's team, a post he still holds today.

“I’m just trying to get the kids to play hard," Rhodes told the Waco Tribune Feb. 5 as his Highlassies planned their run at a conference championship. "If you keep doing the little things it’ll put you in a position to win.”

While Rhodes didn't make the majors himself, he does have major league blood in the family. His brother is long-time major leaguer Arthur Rhodes.