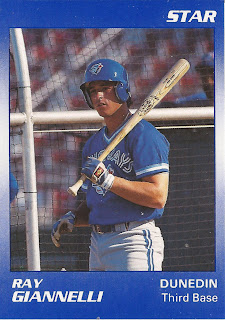 Ray Giannelli hit a home run and a double in this April 1995 Louisville win, according to The Louisville Courier-Journal.

The home run, hit the other way, just cleared the right field fence. The double, The Courier-Journal wrote, went further to left-center, but stayed in the yard.

"I'm having trouble getting that wall out of my mind," Giannelli told The Courier-Journal afterward. "I've got to remind myself to go the other way."

Giannelli hit in the pros for 10 seasons. In two of those seasons, he made the majors. He got into a total of 18 games with the Blue Jays and Cardinals. He picked up five major league hits.

Giannelli's career began in 1988, taken by the Blue Jays in the 38th round of the draft out of the New York Institute of Technology.

Giannelli returned to the minors for 1992, where he played at AAA Syracuse. He played there for three seasons. he hit .287 in 1994, but he didn't return to Toronto.

He moved to the Cardinals for 1995. He started at Louisville. He returned to the majors that September for nine more games. He went 1 for 11 to end his big league time.