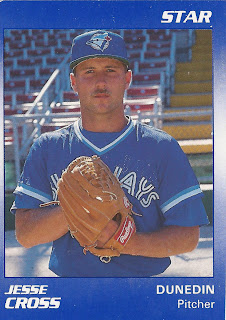 After three seasons in the Blue Jays system where he made AA, Jesse Cross appeared in December 1991 to have his best chance yet at making the majors, according to The Fort Oglethorpe Press.

That's because the Twins selected him in the Rule 5 draft and with it came the potential of making a major league roster, The Press wrote.

"This is probably one of the biggest days of my baseball career," Cross told The Press. "I'm finding out a little more as time goes on, but it looks good, I mean real good. I just want to get in top shape and be ready when I get there."

Cross went to spring training with the Twins in 1992, but he didn't make the team. He also returned to the Blue Jays. In all, Cross played in six professional seasons. He made AAA, but not the bigs.

Cross' career began in 1989, having been taken by the Blue Jays in the 62nd round of the previous year's draft out of Middle Georgia College.

Though Cross didn't make the Twins that spring, he did get to face Jose Canseco with the bases loaded. Cross struck him out, according to The Chattanooga Times Free Press years later.

"That was my highlight," Cross told The Times Free Press. "That's my best memory of playing pro baseball."