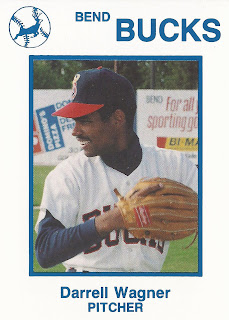 Darrell Wagner's coach at Santa Monica College talked up the hurler's pro chances to The Los Angeles Times in April 1987.

Wagner's own assessment focused on his pitches - and a tendency to do the unexpected, according to The Times.

"A lot of people tell me I have a good fastball," Wagner told The Times. "When most of the batters expect a curve, I give them a fastball and it seems overpowering. But it really isn't."

His coach's predictions notwithstanding, Wagner's pro career turned out to be brief. His life, however, turned out to take an unexpected curve. After he left baseball, Wagner became a father - and joined the military.

Wagner went on to serve 22 years in the Air Force, deploying to Qatar and Afghanistan, before he retired in 2014.

Wagner's pro baseball career began and ended in 1990 with short-season Bend. He turned after playing his college ball at Santa Monica and Lewis-Clark College in Idaho.

At Santa Monica, Wagner threw a six-hitter in an April 1988 win, his fifth win that year.

Wagner then moved to Lewis-Clark State, where a scholarship awaited. He helped Lewis-Clark to two national titles. In one May 1989 NAIA Baseball World Series game, Wagner struck out 16 in a win. He went 9-3 that year, with 2.30 ERA and won team Most Outstanding Player honors.

Wagner then turned pro - instead of taking a different job. Undrafted, Wagner planned to spend the summer of 1990 fighting forest fires, according to The Spokane Chronicle. An old college teammate, however, called with an unexpected pro chance at Bend. Wagner got the spot.

He then earned a tough-luck relief loss early on while striking out three. He later went 4.1 innings in a relief win, allowing two hits and a run. In late August, Wagner beat Spokane with five good innings in the opening of a double-header. Overall, he went 2-6, with a 5.31 ERA to mark the extent of his baseball career.

"I don't regret not fighting forest fires," Wagner told The Chronicle after the late-season Spokane game, "because I did get my chance to play pro baseball."

Wagner then turned to his new career, not in fighting fires, but fighting for his country. The master sergeant recounted to The Lewiston Tribune after his retirement in 2014 his Air Force career, including the constant attacks in Kandahar.

Wagner then returned to Lewis-Clark, where he worked to complete his degree.