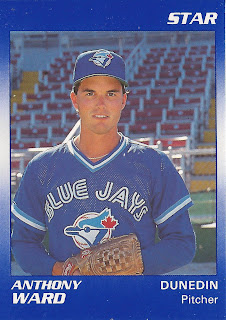 In the midst of perhaps his best season, Anthony Ward told The Tampa Tribune in 1990 he believed in his skills on the mound.

"I use my own strengths to go after hitters," Ward told The Tribune. "If a young pitcher asked me for advice, I'd tell him to not be afraid of the hitters."

Ward played that year at high-A Dunedin and went 14-6, with a 2.83 ERA. He went on to play in eight professional seasons. His strengths got him to AAA, but didn't get him higher.

Ward's career began in 1988, taken by the Blue Jays in the 10th round of the draft out of Oral Roberts University.

At Oral Roberts, Ward struck out 13 in an April 1988 complete game win against Nebraska.

Then came Ward's season at Dunedin. He picked up his 11th victory in a June game, going six innings and striking out seven.

He made AA Knoxville in 1991, then AAA Syracuse in 1992. That May, Ward was set to face the Blue Jays as starter in a Syracuse-Toronto exhibition game. He picked up a relief win in a June game, going two hitless frames.