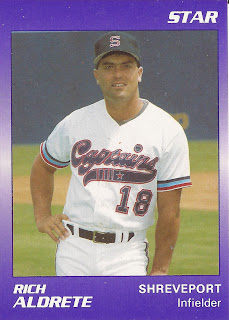 Rich Aldrete believes in the importance of lessons. If kids hope play beyond youth baseball, lessons could help, he told The Monterey Herald in August 2011.

"On a college baseball team today, 90 percent of the players took individual lessons when they were younger," Aldrete told The Herald. "When I was in college, nobody took lessons."

Aldrete spoke as the owner of his own baseball academy in California. He got the overall lack of lessens in his youth to go on from college to the pros. He played six seasons, but he couldn't make the majors.

Aldrete's career began in 1987, taken by the Giants in the 31st round of the draft out of the University of California. Aldrete is the brother of former major leaguer Mike Aldrete.

"I really don't care, it really doesn't mean anything to me," Aldrete told The San Bernardino County Sun of his RBI mark that August. "The playoffs are more important to me. I would rather have a 50-RBI season and make the playoffs then to have a 100-RBI and not make the playoffs."

After playing briefly with the Cardinals at AA and AAA in 1992, Aldrete moved to independent ball for the next three seasons. In spring 1995, Aldrete drew the ire of his brother as he played in replacement ball before returning to the field one final season with independent Salinas.

Aldrete returned home to California and got into baseball instruction and coaching. In 2010, he served as head coach at Cal State Monterey Bay. In 2016, he's listed as running The Hit Clinic in Salinas.