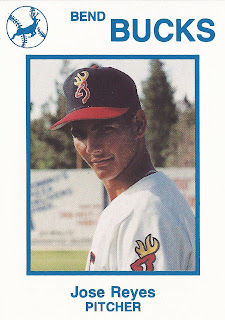 Jose Reyes' first start of 1990 didn't go as planned. A reliever up to that point in July, Reyes gave up a run early, then gave up two home runs later, The Bend Bulletin wrote.

His pitching coach Gene Dusan pointed to the transition from reliever as the trouble, according to The Bulletin.

"Jose still needs to make the adjustment to being a starter," Dusan told The Bulletin. "He has to learn to go as hard as he can for as long as he can, and not try to pace himself. But he's going to be okay in a starting role."

Reyes' shift to starting turned out to be brief. He saw five starts that year and one the next. Overall, he saw time in five pro seasons - and returned to starting in his final two campaigns. He never made the majors.

Reyes' career began in 1990, signed by the Giants as a free agent out of his native Dominican Republic.

Reyes started with the Giants at short-season Bend. He got into 21 games, starting those five. He went 3-7 on the year, with a 3.67 ERA. He also threw one complete game.

Reyes isn't credited as pitching again until 1995. He signed with the Rangers and played between high-A Port Charlotte and single-A Charleston. He went 1-3, with a 5.23 ERA.