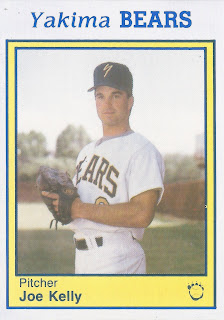 Kelly picked up two wins and seven losses in those outings. He also picked up a complete game and a save, The Bulldog wrote.

The next year, he helped the team on to the College World Series and a title. He also helped himself on to the pros. Kelly, though, proved less versatile there. He played in 17 games, all in relief. Those 17 games marked the extent of his pro time.

Kelly's pro career began and ended that year in 1990, signed by the Dodgers as an undrafted free agent out of Georgia. He went there out of Notre Dame High School in Utica, NY.

At Georgia, Kelly was a member of both the 1987 and 1990 College World Series squads. He even helped the team at the plate, going 2 for 4 as the designated hitter in the championship game.