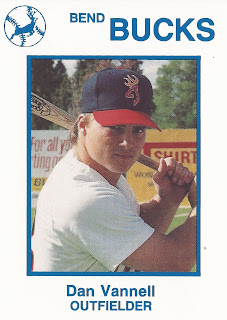 Dan Varnell's qualities as a hitter appeared to be in question by late July 1990. A Varnell pinch-hit performance tended to prove otherwise, according to The Bend Bulletin.

Down by one with a runner on in the eighth, Varnell stepped to the plate and promptly hit his first home run of the year, The Bulletin wrote.

"I knew I had it in me," Varnell told The Bulletin afterward. "It was about time I came through."

Varnell's career began that year in 1990, taken by the Giants in the 34th round of the draft, out of Foothill College in California, after high school at Mountain View. Varnell was also credited as Dan Vannell.

At Mountain View High, Varnell won All-Peninsula honors in 1988 as a catcher.

With the Giants, Varnell started at short-season Everett. But his time there was brief, just four games. He picked up one hit in nine at bats.

Soon, though, Varnell was on a new team, independent Bend. There, Varnell got into 35 games, hitting .316, with two home runs and 15 RBIs.

After his first home run in that July game, Varnell hit his second in a late-August win against Spokane. The shot tied up that game in the fifth.