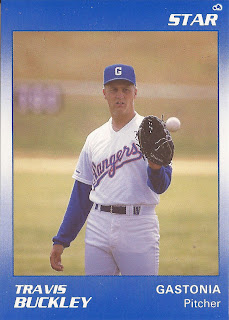 After nine seasons as a pro, Travis Buckley found himself having to get a real job in 1998.

That real job was bar tending.

"I made good money," Buckley told The Wilkes Barre Times Leader that June. "I was taking home anywhere between $120 and $200 a night. But it wasn't the love of my life."

Buckley spoke to The Times Leader having been invited back by his old love, at least briefly. That's because the Braves and AAA Richmond came calling. It was Buckley's 10th and final season. He never made the majors.

Buckley's career in baseball began in 1989, taken by the Rangers in the 24th round of the draft, out of Johnson County Community College in Kansas.

At Port Charlotte, Buckley went through a rough stretch, starting out 0-6 and getting sent to the bullpen. By early July, he was back starting, and throwing a five-hit shutout.

"He pitched an outstanding game," Buckley's manager Bobby Molinaro told The Sarasota Herald-Tribune. "It was definitely one of the best games we've had pitched all season. They had some good swings at him, but Buckley made the pitches when he had to."

That August, he picked up another win with a seven-inning shutout. He then was traded, sent to the Expos Aug. 31 to complete a deal that sent Oil Can Boyd to Texas.

Buckley played 1992 at AA Harrisburg. He then was traded again that November, sent to the Rockies in the club's first-ever trade.

Buckley then got his first time at AAA, with six outings at AAA Colorado Springs. He then played out the year at AA in the Mariners and Reds systems.

He then continued with the Reds through 1996, playing between AA Chattanooga and AAA Indianapolis. He went 14-11 in 1996, with a 4.61 ERA between the two levels.

Buckley played 1997 with the Angels at AAA Vancouver, then returned mid-season 1998 with Richmond. There, he got into just four games, starting three. They were the final four games of his professional career.