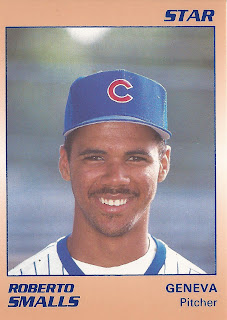 Roberto Smalls got in front of the students and relayed his message of staying in school and staying away from drugs and violence, according to The Virgin Islands Daily News.

Smalls spoke to the students as a former professional baseball player - a former player who is now serving life in prison for murder.

"I was able to pitch a ball 95 mph and had a great future in baseball," Smalls told the students in 2012, according to The Daily News. "But at the age of 23, I traded in my Cubs uniform for this orange prison jump suit, and at 42 I still regret it. I was able to do that and show my skills to huge audiences, now I can only show off to the corrections offices and other inmates."

Taken by the Cubs as their third-round selection in the 1988 draft, Smalls went on to play in three professional seasons. He is credited with his last pro time in 1990.

It was less than four years later, on Jan. 9, 1994, that Smalls, back home in his native U.S. Virgin Islands, opened fire on a group of rival gang members in a pickup truck, killing one - and sending Smalls to prison for life.

For Smalls, though, it didn't start like that. As a 16-year-old, he was a hot throwing right-hander.

In high school in St. Thomas, Smalls, then known as Roberto Ventura, threw five no-hitters - in a row, spending 1987 at a high school in Mississippi. The performance even caught the attention of Sports Illustrated, Smalls, as Ventura, named as one of the "Faces in the Crowd" in its May 17, 1987 issue.

Smalls' high school performances also caught the attention of the Cubs, enough so to select him high in the 1988 draft.

With the Cubs, Smalls started with rookie Wytheville. The Cubs, according to The Chicago Tribune that June, had "high hopes" for the Virgin Islands hurler. He went 3-6, with a 4.36 ERA in 13 starts.

From there, Smalls moved to single-A Charleston for 1989. He went just 5-11 in 23 starts, with an ERA of 4.33. In a start that August, Smalls went just a third of an inning, giving up three earned.

Then, on Jan. 9, 1994, it was the life of an 18-year-old named Renaldo James that was over. It was over at the hands of Smalls. James was described as a "rival gang member."

Smalls contended at trial that he shot in self-defense, according to a wire account citing The Daily News. Smalls contended he was fired upon first. Smalls' story, though, was disputed by nearby off-duty police officers.

That October, Smalls was convicted of first-degree murder, sentenced to life in prison.