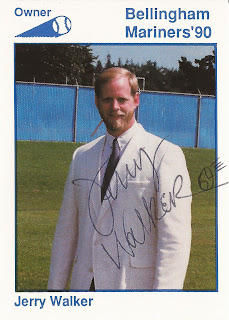 Jerry Walker knew he had a special opportunity, according to The Salem Statesman Journal. As it turned out, it was the coolest thing in minor league baseball in 2017.

The Walker-owned Salem-Keizer Volcanoes planned an entire weekend of activities around the Aug. 21, 2017, solar eclipse that culminated in the first-ever eclipse delay of a baseball game.

"It's impossible for me to explain the magnitude of what this event has created nationwide and worldwide," Walker told The Statesman Journal in a video ahead of the big event without any hyperbole, "in fact, this game is going to be streamed around the world."

Walker had some perspective on the attention the Salem-Keizer Total Eclipse of the Park promotion, about three decades worth.

Walker has owned or been part owner of the Salem-Keizer franchise back to its days in Bellingham, Wash. He stayed with the club through its move to Oregon for 1997 and, in December 2015, his family became sole owners of the operation.

Walker started work in Bellingham in 1989. In addition to his ownership duties, Walker took on the president and general manager titles and, The Seattle Times noted in 1992, he also raked the infield and painted the fences.

The team went from drawing just 429 fans per game the year before Walker arrived to drawing 1,634 per game in 1991. He told The Times his approach in June 1992.

"In the three years before this," Walker told The Times, "we didn't have a marquee player, and we didn't have a winning team. We tried to create an atmosphere that made it fun to come to the ballpark no matter what happened on the field."

Despite the attendance improvements, it and the city's stadium wasn't enough to keep the Bellingham franchise in place. After a two-year stint with the Giants there, Walker moved the franchise to Keizer, Ore. In 2016, the franchise celebrated two decades in its new home.

Ahead of the anniversary, the Walker, his wife Lisa and family purchased the rest of the team from former co-owner Bill Tucker.

"Lisa and I are honored that this ownership partnership of 27 years helped contribute to three World Series Championships and six Northwest League pennants," Walker said in a statement upon the announcement, "it is one of the great recent runs in Pacific Northwest Minor League baseball and we thank Bill Tucker and his family for their true passion for the game."

Then came 2017 and the eclipse game. The Statesman Journal wrote that Walker requested the home game two years in advance as he knew the path of totality would go right over the stadium. The club then planned an event around it, including scheduling the game for the morning to coincide with the big event.

In October 2017, the promotion won the MiLBy award for Promo of the Year in the minors.