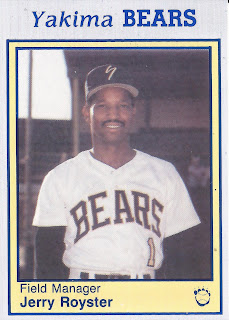 The Brewers changed managers in early 2002 and turned to Jerry Royster to take over.

Royster, taking over after spending a decade leading teams in the minors, seemed to have the touch, at least initially, as the 3-12 Brewers rattled off three-straight wins.

Compared to his big league coaching and playing time, Royster's big league managerial time ended up brief, only that season.

Royster's long career in baseball began in 1971, signed by the Dodgers as an undrafted free agent out of Sacramento High School.

Royster spent 1971 at single-A Daytona Beach and Bakersfield. He hit AA El Paso in 1972, then AAA Albuquerque and Los Angeles in 1973.

Royster saw 10 games with the Dodgers his first year, six in 1974 and 13 in 1975. The Dodgers then sent Royster to the Braves in a six-player deal that included Dusty Baker and Lee Lacy.

In 1982, he helped the Braves to the Western Division crown. He hit .295 over 108 games and high-fived teammates as they learned they'd clinched.

With the Padres in 1985, Royster sealed a San Diego win over his old team the Braves with an extra-inning sacrifice fly.

"I came out here just trying to win a baseball game," Royster told UPI after that game. "I didn't have much time to think about beating my old team. I just wanted to make sure we get back on track."

Royster played until 1988, when he returned to the Braves for a final season. He then signed on with the team that originally signed him, the Dodgers, as a minor league manager in the rookie Gulf Coast League.

"He came down here and dominated excellent pitching," Royster told Baseball America of Piazza. "He can hit in the middle three spots in the order and throw people out."

Royster served 1993 as third base coach with the Rockies, then 1995 as manager with the Padres at AA Memphis and then spent three seasons managing AAA Las Vegas.

He joined the Brewers as bench coach in 2000 and took the helm as manager in April 2002. Despite the promising start, the Brewers finished with the league's worst record and he was fired at season's end.