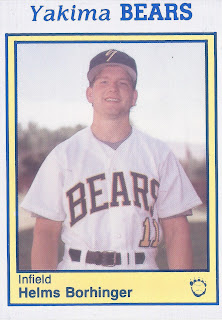 Helms Bohringer's Mineola High School baseball team went through some tough years on the way to a playoff birth in 2014, according to The Mineola American.

But it was the team's effort through those years that got them to that point, Bohringer told The American.

"They did everything they were supposed to do from a work ethic standpoint," Bohringer told The American. "They believed that they could win and sometimes that a tough thing when you came up as sophomores and you're losing."

Years earlier, Bohringer played for Mineola High and his work ethic took him on to college and to the pros. His pro career lasted three seasons. He missed AA.

Bohringer's pro career began in 1989, taken by the Dodgers in the 37th round of the draft out of Adelphi University. Bohringer has also been credited by his formal name Helmut Bohringer and misspelled as Helms Borhinger.

At Adelphi, Bohringer hit .400 for the team in 1987 and helped play his team twice to regionals and won all-Northeast in 1989. He was inducted into the school's Hall of Fame in 2000.

He started with the Dodgers in the rookie Gulf Coast League and at single-A Vero Beach. He got into 43 games between them and hit .247.