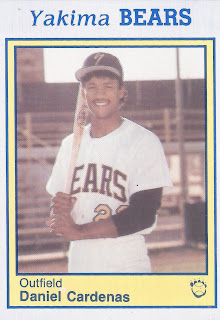 The Salem Dodgers lost big in this August 1988 game, but the club did have some bright spots, according to The Salem Statesman Journal.

One of those bright spots The Salem Journal noted Daniel Cardenas' performance. Cardenas went 3 for 4 for Salem in the 10-4 loss.

Cardenas played in that game for Salem in his first season as a pro. He went on to play in four. He made it to high-A, but no higher.

Cardenas started that season, signed by the Dodgers as a free agent out of his native Dominican Republic.

Assigned to short-season Salem that first year, Cardenas got into 41 games as an outfielder. He hit .222, with three home runs and 17 RBI.