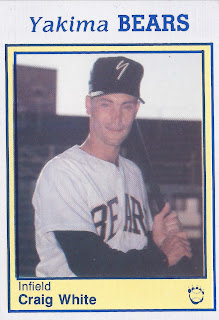 Chris White racked up the accolades in college, according to his old school. In 2010, he added one of the school's own top accolades, its Hall of Fame.

White played three seasons at Pennsylvania's Slippery Rock University. Along the way, he won first-team All-American honors from the American Baseball Coaches Association. He also won a regional honor and two state honors, according to the school.

White took those college honors on to the pros, but he couldn't take them to a long career. He played two seasons in the Dodgers organization. He never made single-A.

White's career began in 1989, taken by the Dodgers in the 23rd round of the draft out of Slippery Rock. He went to college out of Bethel Park High School in Pennsylvania.

With the Dodgers, White started at rookie Great Falls. The infielder hit .274 in 45 games. He hit one home run and knocked in 26.