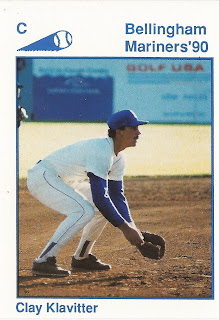 Lightly used to that point in 1991, Clay Klavitter stepped to the plate as a pinch hitter and delivered with an RBI single, according to The San Bernardino County Sun.

"It was kind of exciting to come in like that," Klavitter told The Sun afterward. "It's kind of hard. You're sitting for so long. You've just got to be mentally ready."

That season marked Klavitter's second as a pro. He never became a regular. He saw 58 games that year and another 34 two years later in independent ball marking the extent of his career.

Klavitter's career began in 1990, taken by the Mariners in the 35th round of the draft out of Glendale Community College in California. He went to Glendale out of Deer Valley High School in Arizona.

Klavitter started with the Mariners at short-season Bellingham and in the rookie Arizona League. He got into 32 total games at catcher and in the infield. He hit .222, with one home run and eight RBI.

After a year away, Klavitter returned for one final season at independent Rochester. He hit .183 over 34 games to end his career.

Klavitter soon returned to the game as assistant coach at his old high school Deer Valley. He then moved on to other high schools, including serving as head coach at Cortez high school from 2001 to 2009.

"These guys were my first group when I got started with this program four years ago," Klavitter told Sports360AZ that April. "I knew this was a special group not just talent-wise but with the quality of kids they were. The leadership qualities and their chemistry is the difference with this group compared to teams in the past."
1990 Minor League Tally
Players/Coaches Featured: 2,802
Made the Majors:1,063-37.9%
Never Made Majors:1,739-62.1%-X
5+ Seasons in the Majors: 443
10+ Seasons in the Minors:265
Posted by Steve78 at 9:00 PM