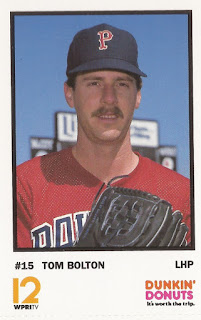 Tom Bolton hadn't fared well in starts earlier in 1993. But, in this August start, he was an ace.

Over eight innings in this August game, Bolton gave up just five hits and a single run, according to The Associated Press. He also picked up the win.

Bolton was in his seventh major league season, in a career spent as both a starter and as a reliever. He went on to play in one more season. By the time his career was over, Bolton had gotten into 209 major league games, picking up 31 wins and one save.

Bolton's professional career began in 1980, taken by the Red Sox in the 20th round of the draft, out of Antioch High School in Tennessee.

With the Red Sox, Bolton began at short-season Elmira. He then first made AA in 1983 at New Britain, and AAA Pawtucket that same year.

Bolton didn't make Boston, though, until 1987, his eighth season as a pro. Bolton got into 29 games for Boston that year, posting a 4.38 ERA. He picked up his first major league win in a July contest, working in relief.

"The win hasn't really hit me yet," Bolton told The AP afterward. "The sinker was working and that's definitely my best pitch."

Going into 1991, Bolton told The Patriot Ledger News Service he knew he still had work to do.

"I know there's room for improvement," Bolton told the news service. "The changeup will give me another pitch against right-handed batters - probably make me a little tougher on them."

Bolton stayed with the Red Sox into 1992, when he was traded to the Reds for Billy Hatcher. He moved to the Tigers for 1993, then the Orioles to finish out his big league career in 1994.

His big league career over, Bolton didn't stop pitching for four more seasons. He threw his final pitch in 1998 with hometown Nashville.

In 2011, Bolton, living in Nashville and working in real estate, looked back on his career for the Nashville Sounds Web site. What he focused on was his trip to the majors.

"Overall, in the big picture, I struggled for seven years in the minor leagues," Bolton told the site. "But I persevered and followed through and made it. That is what I am most proud. If I were doing a job interview with a company, I would want them to know that about me. That I did not give up."