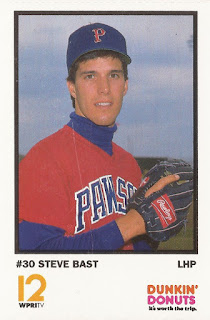 Steven Bast partially realized the dream of many boys growing up, he played professional baseball.

For Bast, though, that wasn't his dream. His dream involved something else: Medicine.

"I always liked to play the game, but that wasn't ever my dream," Bast told his alma mater's news service at USC.edu in 1996. "I just always kinda used baseball as a stepping stone to get to where I wanted to go."

Where he wanted to go was to medical school, to become a doctor. And he achieved that, studying while pitching for the Red Sox in the minors over five seasons. He got his degrees then and later, but he never made the majors.

Bast's professional baseball career began in 1986, taken by the Red Sox in the fifth round, out of the University of Southern California. He'd been drafted by the Angels in the third round three years earlier, but he instead chose college then over the pros.

With USC, Bast was credited with being instrumental in an early March victory with a relief outing. The pitcher came in with two on in the fifth, setting down 11 straight.

His season as a reliever that year came after a season starting, and losing a school record 11 games, The Los Angeles Times wrote. "I'll do whatever it takes to win," Bast told The Times then. "I'm tired of all the losing."

Bast, though, missed all of 1988, undergoing Tommy John surgery from Dr. Frank Jobe, Peter Gammons wrote in June 1989 for Sports Illustrated. Gammons also wrote then about Bast's pursuit of a medical degree. Then, Bast was applying to Harvard Medical School, though he ultimately returned to USC.

Bast then left baseball, for his medical career. In 2003, Gammons referenced Bast again, this time for ESPN.com. Gammons noted that, years earlier, Bast underwent surgery from Dr. Jobe. By 2003, Dr. Bast was working with Dr. Jobe.