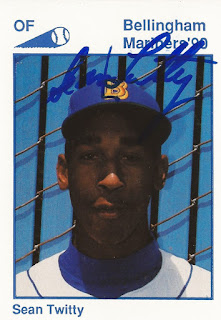 Derek Jeter discussed his long career with Sports Illustrated in 2009 and what kept the superstar grounded.

"I don't think I've changed," Jeter told SI. "I think people around you change. The way they react when you're around. My closest friends I've had for a long time."

SI then named members of Jeter's small inner circle a short list of six names. Among them: Sean Twitty.

Twitty met Jeter in the minors with the Yankees and the two struck up a lifelong friendship - Twitty worked with Jeter on his foundation.

While Jeter went on to have a Hall of Fame career in the majors in his playing career, Twitty played seven seasons. He never made AA.

Twitty's career began in 1989, taken by the Mariners in the eighth round of he draft out of McClancy Memorial High School in New York.

Twitty started with the Mariners in the rookie Arizona League. The outfielder hit .250 in 46 games. He moved to short-season Bellingham for 1990 and 1991, then high-A San Bernardino and Peninsula for 1992.

He extended a lead for San Bernardino with a single in June 1992 game. He went 3 for 5 in another June game a year later, knocking in two. Twitty hit .301 in 78 games.

"It's confidence, mostly," Twitty told The San Bernardino County Sun after that 3 for 5 game. "If your confidence level is high, your mechanics will come through."

Twitty arrived with the Yankees in August 1992, traded for Tim Leary. He saw eight games at high-A Fort Lauderdale. Then played 1993 with co-op San Bernardino and high-A Prince William.

Twitty saw brief time at high-A Tampa in 1994, where he played alongside Jeter. He then played one more season, largely at single-A Greensboro. He hit .283, ending his career.

His life connected to the game continued through Jeter and Twitty soon saw New York. The New York-native Twitty helped show Jeter around the city.

He's mentioned in a 1997 New York Magazine feature on Jeter, accompanying Jeter and Jorge Posada to a concert. Jeter then recalled in his book heading out with Twitty after the 1999 All-Star game. Jeter and Twitty were even caught in a 2005 wire photo playing a video game together.