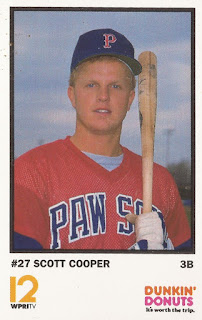 Scott Cooper's father told him he wasn't trying to replace anyone in 1993, Cooper told The New York Times.

He was just taking over third base duties for the Red Sox, coming after Hall of Famer Wade Boggs.

"Nobody replaced Reggie Jackson," Cooper told The Times that March. "Guys came after him and succeeded because they played their game. It's not going to be what Wade Boggs did. It's going to be what Scott Cooper can do."

Cooper ended up staying at third base for the Red Sox for three seasons, part of a career that spanned seven big league years and took Cooper to Japan.

Cooper's career began in 1986, taken by the Red Sox in the third round of the draft, out of Pattonville High School in Missouri.

He started at short-season Elmira, hitting .288 in 51 games. He then moved to single-A Greensboro in 1987. He made AA New Britain in 1989, then AAA Pawtucket in 1990. He then debuted with Boston for two games that September.

That spring in 1993 Cooper answered repeated questions about Boggs' departure. At Pawtucket, Cooper recalled being constantly reminded he was blocked in the majors by Boggs.

"That's going in my head constantly," Cooper told The Associated Press. "But I was raised to (believe) if you put your mind to it, you can pretty much do anything you want."

In April 1994, Cooper hit for the cycle. He went 5 for 6 in that game. He also had family in attendance. It was part of a month were Cooper hit a total of six home runs.

"Last year, I wanted to show everybody I could hit the ball and hit it hard," Cooper told The AP. "I went out and did that. I had a solid year. This year, if I take a swing and miss it, I don't care anymore because I know I took a good swing and I gave it my best chance to hit the ball hard."

For 1995, Cooper was traded to the Cardinals. He played the year there, before going to Japan for 1996 to play with the Seibu Lions. He then returned stateside for one final season in the majors, with the Royals, ending his career.