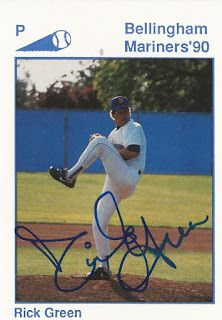 Bellingham hurler Rick Green suffered a devastating injury in this 1990 game and he did so on a simple pitch, according to The Seattle Times.

During his delivery to the plate, The Times wrote, his pitching arm snapped and he collapsed.

"It's a one in a million thing. We're not really prepared for it," Bellingham trainer Spyder Webb told The Times later. "It was like he fell out of a 20-story building and hit the ground."

Green missed the rest of that year - his first as a pro - and all of the next. He returned for 1992 but only saw brief time, marking  the extent of his career. He never saw AA.

Green's pro career began in 1990, signed by the Mariners as an undrafted free agent out of Orange Coast College in Costa Mesa, Ca. Green is also credited as Derek Green.

At Apple Valley High School, Green did his part in a big March 1985 win, according to The San Bernardino County Sun. Green, the Apple Valley pitcher, hit a home run.

Green then turned pro out of Orange Coast while working in the offseason as a warehouse supervisor, according to his Bellingham card.

Green played that first season with the Mariners as a pitcher between short-season Bellingham and high-A San Bernardino. He saw five outings at San Bernardino and seven starts at Bellingham. He went 1-3, with a 4.58 ERA between them, before his season-ending injury.