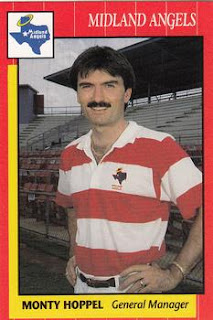 "We knew he was a winner instantly, but we really had no idea just how great he would become," Richmond told Baseball America in 2010. "Because of Monty, we believe we have the finest staff in the business. Our franchise is unsurpassed in staff loyalty and longevity. We really are, in many ways, a family."

Hoppel has won multiple awards during his long tenure in the Permian Basin area of Texas, including five similar honors from the Texas League.

Hoppel's long career in baseball, however, began elsewhere, in the Montana and the Pacific Northwest. Hoppel grew up in Montana and then graduated from Gonzaga University in Spokane, Wash. He graduated with a degree communications and a minor in business.

He then started in baseball there in Spokane, with the Spokane Indians, before moving to the AAA Tucson Toros for five years. He became assistant general manager at Tucson and briefly interim general manager.

"We don’t have any control over the players on the field or the weather," Hoppel told Gonzaga Magazine. "But everything else we can control. We have made this a family-friendly entertainment venue, with games, promotions, fireworks and guest appearances."

To his hometown Billings Gazette in 2003, Hoppel told of seeing his hard work turn into entertained fans.