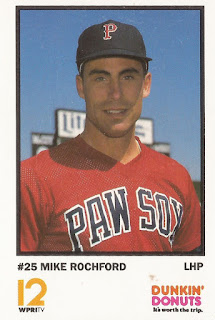 Mike Rochford was in his third season with time in the majors, but, with just six previous outings together, The Associated Press still referred to Rochford as a rookie.

In his first outing of 1990, Rochford performed as a rookie, giving up four earned runs in just 1.2 innings of work. He also found himself watching the opposing pitcher, Tigers veteran Frank Tanana.

"I just had trouble adjusting," Rochford told The AP. "I was trying to watch (Frank) Tanana to see how he fell off that mound. I thought I had good stuff, but I just couldn't execute."

Rochford only got the opportunity to execute just once more, a mop up role four days later against the Brewers, ending his big league career.

Rochford's professional career began in 1982, taken by the Red Sox in the first round of the January draft, out of South Burlington High School in Vermont and Sante Fe Community College.

He played that year at short-season Elmira, going 6-4 in 14 starts. He moved to single-A Winston-Salem in 1983, then jumped to AAA Pawtucket in 1984. At Pawtucket, Rochford went 8-10 in 22 starts and 9 relief appearances.

But Rochford wouldn't make Boston until 1988.

He split 1985 between Pawtucket and AA New Britain. In August, he took a no-hitter into the seventh, picking up a win. He spent 1986 back at Pawtucket, getting 25 starts. In June, he was even talked about for a call up, but the call up never materialized.

After two more years back at Pawtucket in 1987 and 1988, Rochford finally got his call to Boston in September 1988. He got into two games in relief, going 2.1 innings without giving up a run.

Rochford debuted against Wally Joyner, giving up a single that plated an inherited runner.

"I came over the top with a slider, and he just pulled it over the second baseman's head," Rochford told The Los Angeles Times later. "I guess, in that situation, I should've stuck with that (sidearm) pitch."

Rochford's professional baseball playing career ended that year in 1990, as well, getting eight starts and one relief appearance. He then moved to Japan, playing that year for the Yakult Swallows.

Rochford's sports career, though, has gone on. Rochford serves as director of golf in 2012 at Florida's Mizner Country Club.