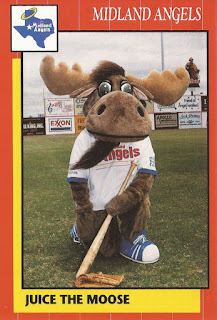 The latest Juice the Moose took the field and the stands at Midland's Citibank Ballpark in 2007, the fourth incarnation of the antlered mascot in nearly two decades, according to MiLB.com.

Midland General Manager Monty Hoppel explained to MiLB the importance of Juice to the team and fans.

"Juice the Moose has been a part of our franchise and the Permian Basin for 18 years now," Hoppel told MiLB. "Juice began as our mascot in 1990 when we played at Christensen Stadium as the Midland Angels, and we feel like it just isn't quite summer without an oversized moose and dog running about the ballpark."

The latest incarnation came as an unplanned move. That's because someone stole the third incarnation ahead of the season and the team had to have another made.

Juice continued to entertain fans in Midland in 2017 before, according to his team bio, heading back up north for the off-season and getting some sleep.

Juice continued with Midland even after the club changed names and affiliations from the Angels to the RockHounds and Athletics in 1999.

Then came 2007 and the mascot costume theft. The sheriff's department investigated, but the team went ahead and ordered another costume.

Juice then returned in July. The team worked a cover story: He was just visiting other teams in the Athletics system.

"It sounds as if Juice is doing well, we hope to get into contact with him in the next week, so that we can get him on the next flight here," Hoppel said in a release. "At this point getting Juice back to the Permian Basin is our number one priority and we hope to have him back at Citibank Ballpark by Thursday, July 12th."