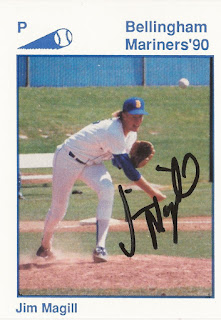 Jim Magill entered is third professional season in 1990 and his new manager P.J. Carey expressed satisfaction with his progress, according to The Seattle Times.

Magill was "our most consistent pitcher in extended spring training," Carey told The Times. "He has made a lot of progress on his mechanics. He has close to an average fastball. He's been throwing strikes, has a good breaking ball, is working on a changeup. He's improved all around."

Magill played that year Bellingham, but he couldn't continue that improvement. He saw only a single game the next year, lost all of 1992 and returned to the field for one final season. He never made AA.

Magill's career began in 1988, signed by the Mariners as an undrafted free agent out of Tottenville High School in New York.

At Bellingham in 1990, The Times highlighted Magill's height, 6 feet, 10 inches tall, as he went five innings in a June start in "showing surprising control and cool" for his size. He went 4-7 over 15 starts, with a 4.18 ERA.

Magill then moved to high-A Reno for 1991, but his season was limited to a single inning where he gave up five earned runs.