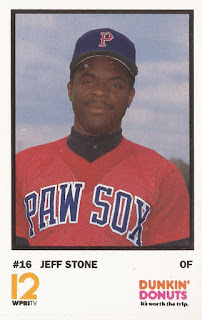 Pressed into service in this May 1989 game, Jeff Stone delivered.

He delivered for the Rangers with a double, a triple and four runs batted in.

"I found out I was playing after I did about 100 pushups and laps in the outfield," Stone told The Associated Press after the game. "It was kind of strange, but I had a job to do."

Stone was in his seventh season that year of doing at least some of that job in the majors. He would go on to play in one more.

Stone started doing that job back in 1979, signed by the Phillies as an amateur free agent out of North Pemiscot High School in Missouri.

Stone played his first games in 1980, at short-season Central Oregon. He hit .261, with 32 stolen bases. The next year, at single-A Spartanburg, Stone started to really show his speed, topping the century mark in stolen bases, swiping 123.

Over his 13-season career, Stone would steal 525 total bases in the minors and 75 in the majors. Years later, Ed Nottle, who managed Stone later in Stone's career, approvingly referenced Stone's speed in an interview with The Greatest 21 Days, saying Stone "ran like a God damn wild man."

Stone made AA Reading in 1983, then Philadelphia that September. He picked up three hits in four at bats. Two of those hits were triples, knocking in three in the Phillies finale.

Going into 1985, Stone had himself a starting job, The AP wrote. The team also saw Stone as on his way up.

Stone "has a chance to be a tremendous offensive player," Phillies manager John Felske told The AP. "And we expect him to get better and better. Defensively, he gets to balls nobody else can."

He then moved to the Orioles for 26 games in 1988, then got into 40 games between the Rangers and Red Sox in 1989. His final major league games came in 1990, 10 appearances with the Red Sox. He then played two more seasons in the minors, without making it back to the bigs.

In late September 1990, Stone used one of his few at bats to help put the Red Sox in first place with a ninth-inning RBI single, The AP wrote.

"This has to be the highlight of my career," Stone told The AP afterward. "I haven't faced live pitching since I've been up for 27 days. I didn't think about the situation, though. I just tried to be aggressive at the plate."