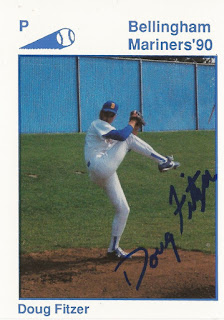 Fitzer received that coaching in his third season as a pro. He went on to play in three more seasons, but whatever coaching he received, he never made it higher than AA.

Fitzer's career began in 1990, taken by the Mariners in the 25th round of the draft out of the University of Detroit Mercy.

He started with the Mariners at short-season Bellingham. He went 5-1, with a 2.70 ERA.

He then played 1991 at high-A San Bernardino. In 30 relief outings, he picked up three wins and one save. His season ended a little early for nerve surgery.

Fitzer then moved to high-A Peninsula. He picked up his second of six saves on the year in a June game. He gave up a home run in an August contest. He picked up three wins on the year, with a 1.35 ERA over 26 outings.