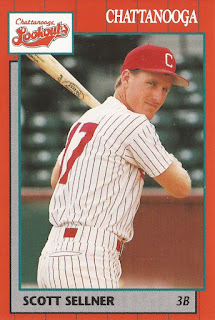 The Chattanooga Lookouts got the better of the Greenville Braves in this May 1990 game and Scott Sellner did his part to help Chattanooga pile on.

His Lookouts already leading 3-0 in the fourth, Sellner knocked an RBI single to start a four-run frame. Chattanooga went on to win by a score of 12-2.

Sellner knocked in that run in his fourth season as a pro, his first at AA. He returned to Chattanooga the next year, but he would never make it higher. He played those five seasons, all in the Reds organization, but he didn't make Cincinnati.

Sellner's career began in 1987, taken by the Reds in the 26th round of the draft out of Cal State-Sacramento.

The Mets originally took Sellner in the 33rd round of the 1983 draft out of Cordova High School in California, but he chose college.

With the Reds, Sellner started at rookie Billings. He hit .313 in 45 games. He also hit four home runs and knocked in 22.