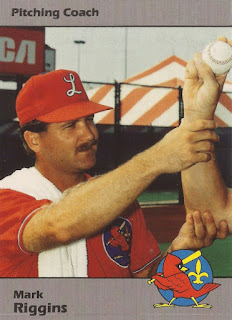 When Cardinals manager Joe Torre announced his new pitching coaches for 1995, much of the pitching focus went to Torre's new bullpen coach, not his new top pitching coach.

Riggins - along with Torre and Gibson for that matter - only lasted through that 1995 season in his big league Cardinals post. But Riggins would go on continue teaching pitching in the Cardinals organization, serving as the team's minor league pitching coordinator for the next 12 seasons.

Until Riggins jumped to the Cubs in 2008, becoming Chicago's minor league pitching coordinator, Riggins had spent almost his entire career in the St. Louis system. Riggins' involvement with the Cardinals dated back to 1979, when he signed with the club as a pitcher, out of Murray State.

Riggins' pitching career didn't go as well as his coaching one. He played five seasons in the Cardinals system, getting as high as a brief look at AAA Louisville. He had his best seasons at single-A St. Petersburg with sub-2 ERAs. He did give up the winning run to Daytona Beach in an April 1980 contest there.

But, as he got higher, so did his ERA. His playing days were done by the end of 1983. Out of his playing career came a coaching career. Riggins began coaching at rookie league Johnson City in 1984.

By 1990, Riggins was the pitching coach with the team that he only got a brief look at as a player, AAA Louisville. Riggins stayed there until his promotion to Torre's Cardinals.

Becoming the minor league pitching coordinator in 1996, perhaps Riggins' most famous student was one-time Cardinals pitcher Rick Ankiel. Riggins spent 35 days with Ankiel after the once hot young pitcher imploded with control problems after the 2000 playoffs. It wasn't until late 2004, however, that Ankiel returned to the majors as a pitcher. Ankiel later returned as a position player.

"I was extremely pleased with the way he threw," Riggins told MLB.com after an August 2004 minor league warm up. "He had good velocity, good control and he was composed. For getting out there the first time, this was an outstanding night for him."

Riggins jumped to the Cubs for 2008, taking on a new set of students, including young Trey McNutt. A late-round pick in 2009, McNutt made it briefly to AA in 2010.

"Ultimately, your make-up carries your ability beyond A-ball, to the Double-A, Triple-A, and big-league level," Riggins told The Peoria Journal Star in an article about McNutt that suggested the pitcher had that make-up. "That's a great thing for us, if we get the guys that have good make-up along with ability."