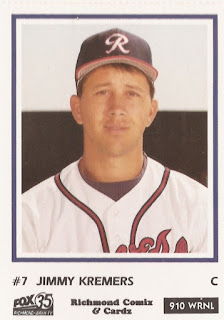 Jimmy Kremers was an outfielder growing up. It was in college, at Arkansas, when he switched to catcher. Speaking to The Sumter Item in 1988, Kremers saw that late switch as something that was to his advantage.

"Starting as late as I did, I haven't had the chance to pick up any bad habits," Kremers told The Item. that August. "Someone who has been catching since they were a kid could have some bad habits and they are hard to break. But I had a good catching coach at Arkansas and he showed me the proper way to do things."

The switch worked, helping Kremers go through the Braves system, all the way to Atlanta. Kremers got into 29 games for the Braves in 1990, but he didn't return.

Kremers' professional career began that year in 1988, selected by the Braves in the second round of the draft out of Arkansas. The previous year, with Arkansas, Kremers helped the Razorbacks in the College World Series, getting five RBIs in one loss, then a key RBI in a win.

Kremers signed with the Braves, a team that liked what they saw in the catcher. He went .303 and had eight home runs for Arkansas that year.

"We like him a lot," Braves GM Bobby Cox told The Associated Press. "He's a left-handed hitter with power and a powerful arm. We think he can come along quick, two years, maybe."

Kremers played his first season at single-A Sumter, hitting .266 and five home runs. He hit AA Greenville in 1989, then AAA Richmond in 1990. His hitting fell off both years, to the .230s. He hit 16 home runs at Greenville, he also hit two in the playoffs.

It was in June 1990 that Kremers got his call up to Atlanta, meeting Cox' original timeline. In 29 games and 73 at bats, though, Kremers got eight hits, an average of just .110. He tripled and scored in a July game.

Going into spring 1991, Kremers was looking for a spot as a backup catcher for the Braves. He tripled and scored in a mid-March game. He also got traded, to the Expos for Otis Nixon. He played the year at AAA Indianapolis.

Kremers stayed with the Expos system into 1993, then signed with the Brewers. He played at AAA New Orleans in 1994.

For 1995, Kremers signed with the Marlins. He first wavered, then agreed to replacement ball.

"They did guarantee me a job and a certain salary," Kremers told The South Florida Sun-Sentinel of his indecision. "But I just have this fear of this (strike) ending quick. Watch - it will probably go three months and I'll kick myself in the rear for not doing it (being a replacement)."

The strike did end quick. When it did, Kremers was one of the replacement Marlins who received a $25,000 bonus, in addition to the $5,000 they were originally to get.

"This is incredible," Kremers told The Associated Press after getting the bonus. "Some of these people have never made more than $8,000 or $9,000 in a total year."