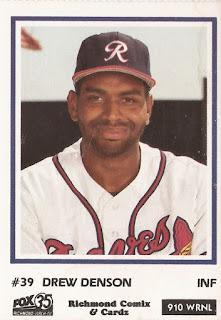 There can be a lot of things players get extra when they make the major leagues, for Atlanta prospects, the jump from AAA to the majors in 1990 could mean extra home runs, Drew Denson told The Fredericksburg Free Lance-Star that August.

"You hit a ball real good (here), and sometimes you don't get rewarded for it," Denson told The Free Lance-Star, referring to Richmond. "In Atlanta, even if you don't hit it real good, it still might go out."

Denson was speaking to The Free Lance-Star as the Braves' David Justice, a lifelong friend of Denson, had just hit 10 home runs in 12 games for Atlanta.

Denson, however, never got to take advantage of Atlanta's dimensions. He played just 12 games for Atlanta in his career, the previous September in 1989, including four games at home. But he got no major league home runs then or ever. His major league career consisted of just four more games, played for the White Sox in 1993, and Denson was done.

Denson's career began with higher hopes. He was taken by the Braves in the first round of the 1984 draft. He played rookie ball that year in the Gulf Coast League. He hit .322 with 10 home runs.

The next year, he was at single-A Sumter and hit .300. He got two doubles in one May game against Gastonia. But his hitting started to drop off in 1986 at single-A Durham. Denson hit just .234 with four home runs.

In 1987, he made AA Greenville, and wasn't much better than Durham. He hit .219 on the year with 14 home runs. At the start of that year, Braves player development director, the legendary Hank Aaron, included Denson in the list of Braves of the future.

In 1988 Denson was better, hitting .268 staying in AA. In August 1988, Denson was still being talked about as a major-league prospect and a power hitter.

It was in 1989 that he made AAA Richmond and then Atlanta. At Richmond, he hit .255 with nine home runs. He made his major league debut as a September call-up. In 36 at bats, Denson got nine hits.

He was also playing with Justice, with whom he'd played little league with as a child, according to The Free Lance-Star. In one game, Sept. 22, Justice was sent to third on a Denson single. That game Denson also got his first two RBIs, according to The AP.

Denson returned to Richmond for 1990, but hit just .231 without getting a call back to Atlanta. He is not credited with playing in 1991, but returned for 1992 with the White Sox at AAA Vancouver. He got back to the majors in September 1993 for four more games and one more hit.

Denson continued to play at AAA into 1996, with the White Sox, Reds and Orioles systems, ending his career.

His playing days over, Denson returned to his native Cincinnati, becoming a police officer and youth baseball coach, according to The Cincinnati Enquirer in June 2011.

But both his playing days and his officer days are now behind him, according to The Enquirer, as he battles a rare blood disease called amyloidosis "that has ravaged his athletic frame and robbed him of physical comfort."

Denson passed away in February 2014 at the age of 48. After Denson's passing, Calvin Johnson, one of Denson's former police supervisors, who also played against Denson as a youth, told The Enquirer what kind of person Denson was.

"He was a great human being," Johnson told The Enquirer. "He looked big and intimidating but he was just a big, gentle bear with tremendous athletic ability. He was one of the best guys I ever knew."