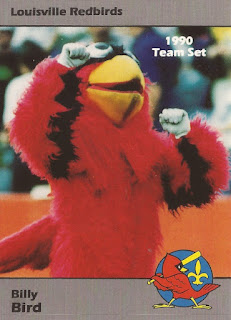 With three years under his belt as the Louisville Redbirds mascot Billy Bird, Dominic Latkovski looked for something bigger in December 1992, according to The Louisville Courier-Journal.

Latkovski, along with his brother and friend, set up a booth at the winter meetings baseball trade show to promote their touring mad-cap minor league entertainment business, The Courier-Journal wrote.

"I think we can make this work," Latkovski told The Courier-Journal. "We feel we can put on as good a show as anyone, and we're inexpensive. We've already had a lot of interest. It's a matter of getting out and doing our act."

The Latkovski brothers have gotten out to do their act many times in the quarter century since. The two co-created the popular minor league touring BirdZerk! and Zooperstars!

By 2015, Latkovski and his brother each neared the plateau of 300 ballparks performed in over their long careers, according to Baseball America.

For Dominic Latkovski, his career as a mascot began in 1990 as he attended Bellarmine University. The Redbirds had an opening, Latkovski tried out and won the spot, according to MiLB.com. (He's even credited by name on the back of his Billy Bird card.)

The Latkovski brothers now head the SkillVille Group, which offers BirdZerk!, the Zooperstars! and other acts to minor league baseball and other venues.

Dominic Latkovski, however, still goes out and performs.