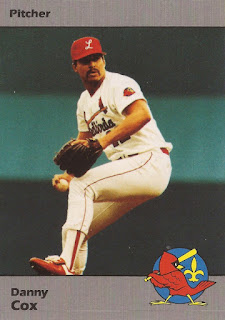 Danny Cox took a perfect game into the eighth inning in this May 1985 game before giving up a single with two outs, according to UPI.

Cox went on to get the win, just not the historic game. Cox was fine with that, he told UPI afterward.

"I didn't worry too much after I lost it," Cox told UPI of the perfect game. "I wanted the win. There will be other games. I hope to be able to pitch well enough in one of them to maybe do it again."

Cox didn't get that close again. But he did get into many other games. By the time his big league career was done, Cox saw time in 11 seasons - and three World Series.

Cox' career began in 1981, taken by the Cardinals in the 13th round of the draft out of Troy University in Alabama.

He started at rookie Johnson City. He moved to single-A Springfield in 1982. In 1983, he went from single-A St. Petersburg to AA Arkansas and AAA Louisville. That August, he also made the jump to St. Louis.

In his major league debut, he showed he could pitch. He went 10 shutout innings for a no-decision. He had to wait a couple weeks for his first win, beating the Astros.

In the NLCS, Cox kept St. Louis from a 3-0 hole, getting past an early jam to go six innings for the Game 3 win.

"He's a battler," Cardinals manager Whitey Herzog told reporters afterward. "When he got out of that first inning, he really battled the rest of the way."

He got into three games in the 1987 World Series. He stumbled in his first outing in a Game 2 loss and he hoped for a second chance.

"What would I do if I got a second chance?'' Cox told reporters after his Game 2 loss. "I'd get the ball down. I made three mistakes tonight, and they hit every one."

Cox got his second chance in Game 5, where he went into the eighth and took the win. He then came on in relief in Game 7 and walked the eventual series-winning run.

Cox returned for 1988, but then injuries sidelined him from the majors until 1991. He played that year with the Phillies, then moved to the Pirates in mid-1992. He joined the Blue Jays for 1993 and saw his final World Series appearance.