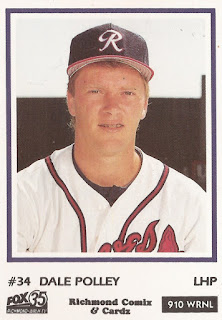 Dale Polley finally got his call in June 1996. He'd made the majors nearly a decade after his professional career began.

Reflecting to The Hartford Courant on why he was there, Polley focused on one thing.

"If it wasn't for that, I wouldn't be here," Polley told The Courant. "I missed the game, my wife was pregnant, the opportunity was there. I don't regret it."

"That" was replacement ball.

Disappointed with his progress, Polley quit baseball after the 1993 season, his seventh as a pro. The pitcher turned tool-and-die worker.

But, as the 1994 strike dragged into 1995, Polley signed on with his old club, the Braves as a replacement. Back in baseball, he played out that year at AAA Richmond.

By 1996, Polley was with the Yankees at AAA Columbus. By June, he was in the Bronx.

The path to that point began in 1987, with Polley signed by the Braves as an amateur free agent out of Kentucky State. He played that year at rookie Pulaski and single-A Sumter. He posted a 2.44 ERA between them.

Polley's problem in 1989, with his 15 losses, was simply run support, Greenville manager Buddy Bailey told The Orlando Sentinel that September.
"This year we averaged two runs a game when he was starting," Bailey told The Sentinel after a 10-1 Polley playoff win, "and it's nice to get him some runs in a big game.''
Polley made AAA Richmond in 1990, posting a 3.53 ERA in 36 appearances, 15 starts. He also made the AAA All-Star team, winning most valuable pitcher honors in relief.

Polley stayed at Richmond for 1991 and 1992. In 1993, though, Polley went backward. He spent most of the season back at Greenville. Then he quit.

Returning for replacement ball with the Braves, Polley stayed on back at AAA Richmond. In 47 relief appearances, Polley posted a 1.56 ERA. But he didn't get called up to Atlanta, and he didn't get invited back for 1996.

Signing on with the Yankees, Polley finally got his call-up in June, at the age of 31. The first batters he saw were Jim Thome and Eddie Murray. He got both out.

"I was kind of fighting myself and fighting the emotions before I came in," Polley told The New York Daily News afterward. "But once I got out there and threw a first-pitch strike, I calmed down."

By early August, Polley hadn't allowed an inherited runner to score in 10 chances before allowing a hit to Harold Baines.

"I wanted to go sinker down and in," Polley told The New York Times after that game. "I just got it up about waist high. He's a first-pitch swinger, too. You have to make sure your first pitch is right where you want it to be. I didn't put it there and I paid for it."

Polley ended up getting into 32 games for the Yankees that year, 21.2 total innings. His ERA, though, swelled to 7.89.

The Yankees went on to win the World Series. Polley didn't pitch in the postseason. He also didn't get a postseason share, one of three former replacements the players voted against giving shares. Owner George Steinbrenner, though, gave each $25,000, a portion of what the shares would have been.

Polley finally finished out his career in 1997, with 62 outings back at AAA Columbus. He did not return to the majors.