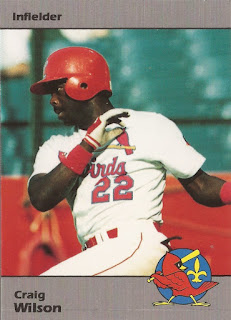 At the age of 30 in 1995, Craig Wilson was looking to make his way back to the majors. It had been two years since he was last there, with the Royals.

Now, Wilson was with the Tigers system, playing at AAA Toledo.

"I want to be consistent, like I've always been," Wilson told The Toledo Blade that April. "I think if I can do that and play good defense, I'll be back."

Wilson hit .263 with nine home runs for the Mud Hens that year in 121 games. But he never got back. It was his final year in affiliated ball.

Wilson's career began more than 10 years earlier, taken by the Cardinals in the 20th round of the 1984 draft. He spent that year at short-season Erie, hitting .294 and seven home runs.

Wilson started 1987 with single-A St. Petersburg, having led the Midwest League in fielding the previous two years at third and second, according to The St. Petersburg Times. Along with his glove, Wilson had speed. He stole 44 bases the previous season at single-A Springfield.

Wilson's 1989 call-up consisted of six appearances, five at the plate. He got one hit and one RBI. By June 1990, Wilson was back with St. Louis. His seventh-inning pinch-hit single helped the Cardinals to a win that month over the Expos.

The Cardinals were also trying the infielder out in the outfield, making him a utility player.

"We want to see if he can play the outfield," Cardinals manager Whitey Herzog told UPI. "We'd pinch-hit him and leave him in there on a double switch if he could play out there."

Wilson played 55 games for the Cardinals that year, hitting .248. In July, Wilson had a hit taken from him by chance. The Dodgers told center fielder Stan Javier to prepare for Wilson by moving to the left. They then quickly changed their mind. Wilson hit it a ball Javier wouldn't have been able to get had he moved, according to The Los Angeles Times.

In February 1991, Wilson was hoping to start the year with the big club. An Annapolis, Md., native, Wilson spoke to the Baltimore Sun, as he readied for spring training.

"I know nothing's guaranteed," Wilson told The Sun. "I'm just going there to win a spot on the team and go from there."

"Hopefully, I'll be given a chance to compete," Wilson said later. "I've played a couple of positions now, so I'm pretty much known as a utility player."

Wilson played 60 games for the Cardinals in 1991 and 61 the next. In one July 1991 game, Wilson's two-run pinch-hit double put the Cardinals ahead for good against the Reds, according to The Times.

By 1993, the Cardinals shipped Wilson off to the Royals with Felix Jose in a four-player deal that sent Gregg Jefferies the other way. Wilson appeared in 21 games for the Royals that year, ending his major league career.

Wilson played 1994 in the Rangers organization and 1995 with the Tigers AAA Toledo club. With Toledo, Wilson showed some power, homering twice in one July game, but he never got back to the majors and his career was done.