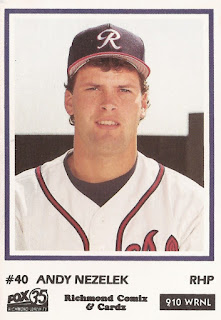 Coming out of college as a junior, Andy Nezelek had one concern before he signed with the Braves: He wanted to finish his education, The Sumter Daily Item wrote in July 1987.

And the mechanical engineering major at Bucknell did just that, delaying his second season to complete that degree, The Daily Item wrote.

"I wanted something I could fall back on just in case baseball didn't work out for me," Nezelek told The Daily Item that July. "Plus, with my education out of the way, I can give all my concentration to baseball."

Concentrating on baseball, Nezelek made AA Greenville in 1988 and AAA Richmond in 1989. But he never made the majors, arm problems helping shorten his playing career and, presumably, begin his engineering career.

Nezelek's professional career began in 1986, taken by the Braves in the fifth round out of Bucknell University. He played that first season at rookie Pulaski, going 2-4, with a 2.71 ERA in 12 starts.

That, and a Venezuelan winter ball performance that was described as strong, earned Nezelek a spot in spring training 1988. Braves manager Chuck Tanner even talked Nezelek up as possibly making the big club, refusing to rule him out in February.

Nezelek, though, spent the year at AA Greenville, going 7-8, with a 4.38 ERA. Speaking to The Orlando Sentinel in June 1988, Nezelek spoke about his delayed start the previous year due to his studies, and hitting Greenville in his first full professional season.

"I think it is unusual for a guy to start his first full year in Double A," Nezelek told The Sentinel, "but I had a pretty good spring and it's not like I haven't been playing baseball."

Nezelek moved to AAA Richmond in 1989, staying there for 1990. Going into spring training 1991, though, Nezelek had a problem with his shoulder. He didn't pitch all year.

Ready for 1992, Nezelek played much of the season at AA Greenville as a reliever. He picked up nine wins, with a 2.14 ERA. He also got two games at AAA Richmond.

Injuries returned in spring 1993. That February, he hyperextended his elbow during batting practice, The Seattle Times wrote. He compared that injury to his 1991 shoulder injury.

"That was shoulder trouble," Nezelek told The Times. "But I don't want this to cost me playing time. I've already missed enough."

Nezelek, though, didn't pitch at all in 1993 or 1994. A 1995 comeback attempt with the Pirates, playing between rookie league and AA Carolina, resulted in a combined ERA of 6.00 in 10 outings, ending his career in baseball.